Poland with its rich history and lovely nature is a pretty and interesting country. Wherever you go, to the south, north, east or west – you will find something interesting. Many places in Poland are real gems and thus have been placed by UNESCO on the list of world cultural heritage. You may admire lovely landscapes and architecture. Travelling with my company as a small or big group  gives You complete flexibility, with itineraries to suit You. Although I am based in Warsaw, I am able to pick you up from any airport or railway station in Poland.

Tell me how much time you are going to spend in Poland and what you would like to explore and I shall prepare proper itinerary of your visit together with You.

Below you may find a sample of popular routes starting from Warsaw:

Minimum number of travellers is four .

The itinerary below is a sample- this tour can be customized  to group needs . 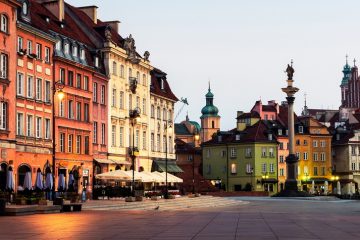 On arrival at Frederic Chopin Airport You will be met in the airport arrival hall & transferred to the Marriott Hotel. https://www.marriott.com/hotels/travel/wawpl-warsaw-marriott-hotel/

Spend two nights there. Time to settle in relax and maybe take your first walk around Warsaw. Warsaw – the capital of Poland is beautifully located on the major Polish river – Vistula . City was founded in the early 14th century and soon became one of the most important towns. In the course of time, it gradually gained political and social importance and King Zygmunt III Waza transferred the Royal official seat from Cracow in 1596. The reconstruction of Warsaw after World War II, which was raised to the ground during World War Two, became for Poles a matter of honour and was conducted with unprecedented  determination. Up to today Warsaw symbolizes the hard fight for survival. The Warsaw Mermaid on the coat of arms,holdind her sword and raised shield, is personification of this. Today Warsaw is the capital of country known to have played a leading role in the breakdown of Iron Courtain . 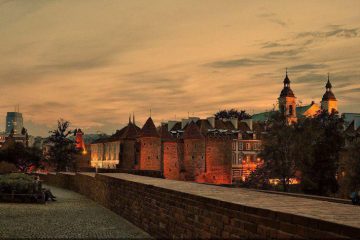 After the breakfast You will explore Warsaw. Five hours Warsaw City Tour .

During this five hours tour You will see remnants of the former Jewish district together with the Ghetto Heroes Monument, the financial and commercial center, the tallest building in Poland and at the same time a socialist realism relic of the previous era – the Palace of Culture and Science. You will admire representative town houses and former magnate residences on the Royal Route and have a walk across the Łazienki Royal Park – the summer residence of the last Polish king Stanislaw August Poniatowski, where we will see among other things the Palace on the Water and Amphitheatre with the scene on the water.

Driving tour through Warsaw including Praga district and the panorama view of Warsaw from the
30th floor of the Palace of Culture and Science.

Light lunch at U Szwejka Restaurant
After lunch time on your own.

Evening dinner at the local restaurant 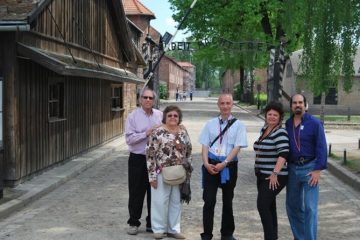 Drive to Cracow after the breakfast .On the way tour at Auschwitz- Birkenau former Concentration Camp. The concentration camp in Auschwitz was established by Nazis on the outskirts of the town Oswiecim in 1940. After the war, the camp was turned into museum displaying evidence of the genocide. Block no. 11, known as the Death Block, was where people were murdered also at the “Wall of Death”. Outside the camp, there is a gas chamber, where 70, 000 people were killed in 1940-1943. In 1941, 3 kilometres from Oswiecim, in the former village of Brzezinka, the Nazis established a new camp called Auschwitz II Birkenau. In 1942-1945, approx. 1. 5 million people lived and died here. Most of them (90%) were Jews, others were Poles, Gypsies, Russians and prisoners from 28 countries of Europe, people of all nationalities and political and religious persuasions. Since 1944, transports of prisoners from all over the continent entered directly through the “Gate of Death”. In 1979, Auschwitz – Birkenau Concentration Camp was listed a UNESCO World Culture and National Heritage Site.Drive to Cracow .Check-in at Andel’s Hotel .Free time .Dinner at your own . 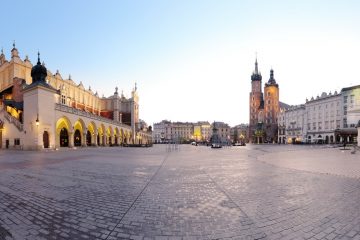 After the breakfast depart for half day Cracow City Tour.  Our tour starts in front of the main gate – St Florian’s Gate which leads us to the centre of the city. The medieval defensive walls – Barbican are well preserved and they have remained up till now in their original form. Via Floriańska Street – a part of the Royal Route – we get to the Main Market Square which is the heart of the city. It used to be a commercial, administrative and religious centre of Krakow, so that is why today we could admire the most important buildings – the Renaissance Cloth Hall, the medieval Tower of the Town Hall and the Gothic church of Saint Virgin Mary – famous for the biggest medieval wooden altar sculptured by Wit Stwosz . On the way to the Wawel Hill we will pass through the University District with one of the oldest universities in Europe founded in 1364 by the king Casimir the Great . At last but not least, we reach the Wawel Hill, one of the most important places in Krakow, where You explore Wawel Castle and the Cathedral-both were built at the very beginning of the existence of the Polish state – 10th century . The Krakow’s Cathedral used to be a coronation and burial site for Polish kings from 14th to 18th centuries and a national pantheon.The Wawel Royal Castle, rebuilt by Italian artists Niccolo Castiglione and Mateo the Italian in the 16th century, holds a unique collection of the 16th century Flemish tapestries.

Jewish prewar district- Kazimierz and Podgórze District Tour- Jewish population had played an important role in the Kraków regional economy since the end of 13th century, granted the freedom of worship, trade and travel by Boleslaw Pious the duke of greater Poland issued already in 1264. Kazimierz, as the town founded by the king Casimirus the Great in the 14th century, was originally a Christian city. By the end of the fifteenth century Jews had been expelled . Before the Second World War Cracow was an influential centre for the 60,000 Polish Jews. The Krakow Ghetto was formally established on 3 March 1941 in the Podgórze district, not in the Jewish district of Kazimierz.During that driving & walking tour You will have a chance to see all seven of Kazimierz’s Synagogues, one of them active and connected with a Jewish Cemetery. Then the route will lead us to Podgorze Disctrict, location surrounded by buildings those witnessed the Holocaust. You will explore the Schindler’s Factory and the remnants of Ghetto’s wall from the World War II period. 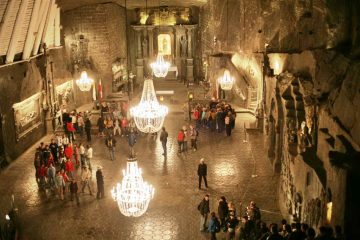 After the breakfast drive to Wieliczka Salt Mine ( UNESCO WORLD HERITAGE SITE ) one of the wonders of Poland.Wieliczka is the oldest European Salt Mine, located 13 kilometres from Cracow. Wieliczka is an impressive underground world of chambers, halls, galleries, salt lakes and sculptures carved from the rock salt.It offers a fascinating journey through airy chambers carved from the rock salt on three levels between 64 and 135 metres before the ground. Duration 3 hours . Drive to Zakopane -on the way lunch at restaurant Czarci Jar in Zakopane –https://czarcijar.pl 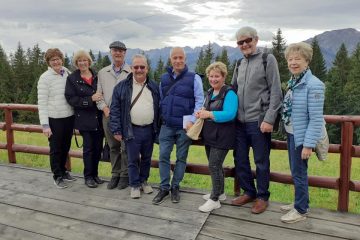 After the breakfast  Tour  of Zakopane- capital of Tatra Mountains and skiing in Poland.Today You will discover  a beauty of this town-exploring cemetery on Pęksowym Brzysku ,Wielka Krokiew ski jump, riding on a cable car up to Gubałówka Hill. A visit will be ended with the culinary experience tasting famous Polish cheese “OSCYPEK”  (smoked sheep’s milk cheese ). Drive to Częstchowa where You will visit the Jasna Gora Monastery with the miraculous Black Madonna picture.Also You see the interesting Way of the Cross painted by Jerzy Duda-Gracz and the Treasure Room with impressive collection of precious gifts given to the monastery. After sightseeing drive to Wrocław (Breskau) . Check-in at Mercure Centrum Wrocław

Free evening- dinner on your own 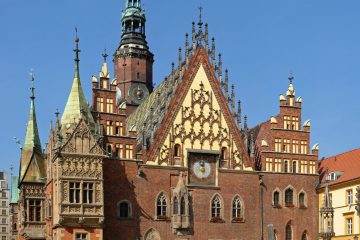 Meals: Breakfast,Lunch, Dinner on your own
Hotel: Mercure Centrum Wrocław

A morning city tour of Wrocław  including :

Return to Wrocław in the late afternoon. Overnight at Mercure 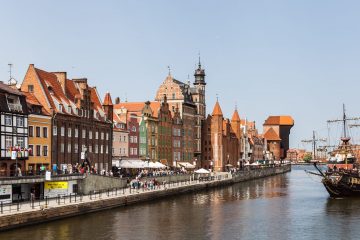 Meals: Breakfast, Lunch, Dinner on your own
Hotel: Hansa

After breakfast drive to Gdańsk. On the way to Gdańsk we will stop in Gniezno which was a cradle of the Polish state in the early Middle Ages .In Gniezno You will explore :

The Basilica of the Assumption of the Blessed Virgin Mary –

Continue drive to Gdańsk After arrival accommodation at your hotel Hansa Hotel – https://hotelhanza.pl/en/ Meals: Breakfast ,lunch, dinner on your own

Gdańsk has a thousand-year history, a city located at the crossroads of important commercial and communication routes, an extensive port and mercantile traditions – all this makes Gdańsk a meeting place of many cultures, nationalities and denominations.

First informations about Gdańsk dated from 997. The defensive and urban complex as well as a port started to really form in the second half of the 10th century.

Gdańsk joined the League of Hanseatic Cities ( 1361) and the fast development of the port are just some of the factors contributing to the strong position of Gdańsk in Europe.

Although much of Gdańsk was destroyed during World War II– approximately 66% , the city has emerged as one of the most beautiful Baltic cities. Its history of changing between Prussian and Slavic rule has made way for a rich cultural experience for anyone who visits.The tragic event in December 1970, and then August 1980 and the martial law period are the successive dates symbolizing the fight of the citizens of Gdańsk against the prevailing communist regime. It was Gdańsk that became the cradle of “Solidarność” which was to transform the then map of Europe. History has come full circle. Today Gdańsk – a half-a-million, dynamically developing agglomeration – is vibrant with life as before and again deserves to be called “the Pearl of the North.”

Lunch at Bar Przystań in Sopot -https://barprzystan.pl/en/#home where You will try probably the best fishes in Poland .After lunch You will enjoy Baltic Sea breeze walking the longest wooden pier in Europe . Return to Gdańsk for overnight . Free dinner this evening .

Route: Gdańsk- Malbork- Warsaw Meals: Breakfast, Lunch After breakfast we head towards Warsaw. On the way we will stop at the stunning Teutonic Knights Order Castle in Malbork-https://zamek.malbork.pl/historia/the-teutonic-order-2
You will explore the Castle with the internal museum guide- Duration 3 hours
Drive to Warsaw-Lunch on the way to capital of Poland .Time to say "GOOD BYE " to Poland in Polish "DO WIDZENIA" Departure transfer to the airport for your flight back home.